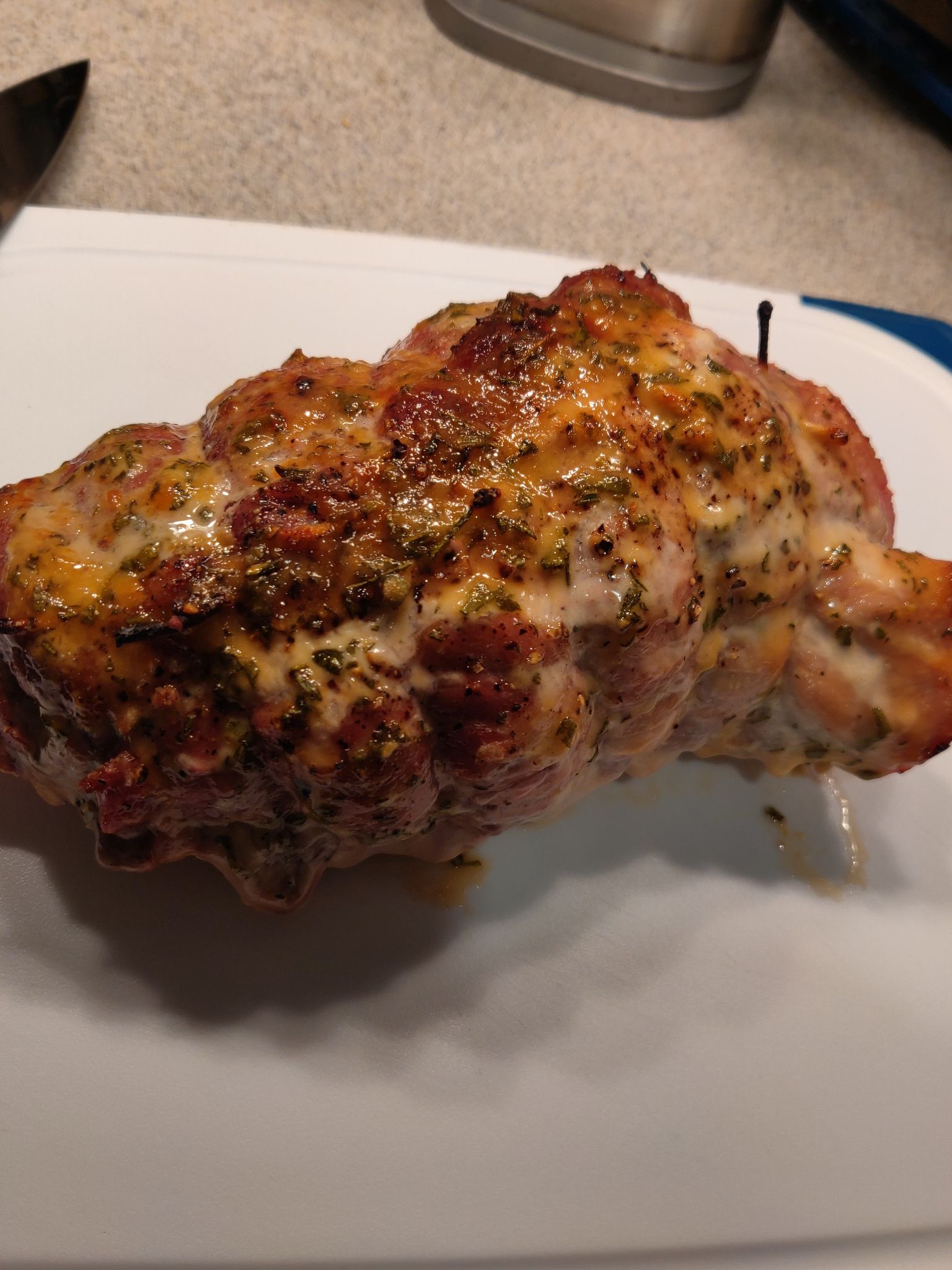 Happy Monday, all! This month, it’s time for the main dish companion to last month’s root vegetable hash side dish. You will notice some of the same ingredients in this recipe as there were in the last, and that’s definitely on purpose.  Let’s get to cooking!

First thing is first, preheat your oven to 375 degrees.  Once that’s done, cut about 6-7 10-inch-long pieces of butcher’s twine.  Set them aside for later. At this point, it’d be a good idea to chop your fresh herbs and set them aside in a ramekin.   Now, it’s time to do some knife work. Make sure your knife is sharp. It’ll make a world of difference.  You need to cut this pork loin out so that it is laying flat.  Start at the bottom of the tenderloin, with the knife parallel to the counter, and make cuts while rolling the loin out flat.  Don’t worry if it’s not perfect.  My knife skills are quite mediocre, so mine ended up looking like this:

Once could say it’s a little bumpy. If you wish, you could pound it out a bit with a meat mallet to get it more consistent.  Me, I’m too lazy for that!  Now that you’ve gotten the pork cut flat, it’s time to make the sauce.  I am using the same herbs that I used in the root vegetable hash to give this plate a bit of a through line. But I assure you it will not be one-note.  The honey and Dijon mixture bring a different layer of flavor to this pork.  As indicated, I am using rosemary in this recipe, so I thought it’d be a good idea to use some amazing rosemary-infused honey I got from Aquidneck Honey. Local honey is the best honey. Thanks Meg!

In a bowl (or in my case, a deli container because I like to pretend I’m working in a restaurant), combine the mayonnaise, Dijon mustard, honey and herbs.  Yes, that’s what I said, mayonnaise. Look, pork tenderloin is very, very lean. It’s going to need some sort of fat to infuse it with moisture to keep make it juicy.  Mayo is great for that.  Make sure to mix the “sauce” well.  I know, it’s not a sauce, but it’s not a glaze either. Make sure the honey gets mixed in and make sure to taste it.  If you want it sweeter, add more honey.  You want it tangier, add more Dijon. Once it’s mixed, slather about half of it on the pork you’ve cut out flat.  Salt and pepper aggressively.  Believe me, you want this well-seasoned. Once applied, roll the pork up the same direction you cut it flat as tight as you possibly can.  Now, slide the butcher’s twine underneath about 1 inch apart from each other and tie it up nice and tight, like such.

The reason you are tying this up is to keep the shape uniform, so the cook is uniform, and the temperature is the same throughout. Once rolled up, slather with the rest of the honey Dijon mixture, then salt and pepper it aggressively. roast in the oven on a roasting pan for about 45-60 minutes, or until a meat thermometer in the middle reads 145 degrees.  Yup, I said 145. I did not stutter. I did not mistype. In case you are not aware, the USDA has said pork can be pink now when cooked. Color is no longer an indicator of doneness, it’s all about Fahrenheit. The safe cooking temp for pork according to the government is 145 degrees.  No longer do you have to suffer the indignity of eating bone-dry white pork.  Halleluiah!  Once it’s reached 145 degrees, pull it out and let it rest for 15 minutes.

Once it has rested, remove the butcher’s twine, slice it up in ½ inch slices (or thicker if you like), and serve with a portion of last month’s root vegetable hash! Enjoy this delicious meal!  Thanks for reading. See you next month!